Mr. Giles, Mr. Miller, and Mr. Albert previously served on Entigral’s Advisory Board.  They joined the company’s Board of Directors concurrent with the company’s recent financing.  Mr. Self joined the Board representing Triangle Angel Partners, IMAF-Cape Fear, and IMAF-RTP, recent investors in Entigral.  The backgrounds of Entigral’s new board members are:

Olin Giles – For 15 years, Mr. Giles was an executive officer with Sensormatic Electronics Corporation (NYSE: SRM, acquired by Tyco International), where he served as CEO of the Sensor ID Division and Sr. VP & CTO of the company. Mr. Giles guided Sensormatic from an $80M retail security manufacturer to become the world’s leading producer of electronic security products for the Fortune 500 company, with revenues exceeding $1.2 billion. Mr. Giles represented the U.S. on the International Standards Organization (ISO) committee responsible for developing today’s passive RFID standards. Mr. Giles received a B.S. in Electrical Engineering and an M.S. in Physics from North Carolina State University.

Thomas O. Miller – Mr. Miller is currently a partner in The Sage Group of Bellevue, WA, a strategy development and implementation organization, where he leads the Auto ID practice.  Mr. Miller has over 25 years of experience within the mobile computing and AIDC industry serving in various executive capacities at Norand Corporation, and Intermec Technologies (NYSE: IN), where he was President from 2004 to 2006. Mr. Miller served on the board of directors of Socket Mobile, Inc. from 2008 to July 2013.  He is a past Chairman of A.I.M. Global and a member of the AIDC100 organization. He received his B.A. in Business and M.B.A. degrees from Western Illinois University.

M. Scott Albert – Mr. Albert is a Venture Partner with The Aurora Funds, Inc., an early stage venture capital firm in the Research Triangle Park, North Carolina. He is a founding General Partner of Aurora which was formed in 1994, and manages nearly $250 million across five venture funds and has invested in over 75 companies throughout the United States. Mr. Albert has over 30 years of venture capital and operating experience, having been in the venture industry since 1983 and having spent time as the CEO of one of Aurora’s portfolio companies, Centice Corporation, for almost 2 ½ years. Mr. Albert currently sits on the boards of several Aurora portfolio companies, including, StrikeIron, Inc. and Unitrends Corporation. Prior to founding Aurora, he was a General Partner at Criterion Venture Partners in Houston Texas.  He has a B.S. in Electrical Engineering from Duke University and an MBA from the University of Chicago.

Mark Self – Mr. Self is Vice President, Retail Industry Marketing at NCR Corporation.  He is responsible for developing enterprise solutions as part of the broad NCR sales strategy.  Previously, he was at Motorola where he served as Vice President, Industry Solutions Group.  Prior to that he held various sales and marketing positions at IBM.  Mr. Self has spent the majority of his career solving problems in the retail, manufacturing and supply chain industries.  His specialties are developing go-to-market strategies, channel strategies and sales execution plans.  He has a BS from the University of California, Davis and a Masters of Management from Northwestern University.

“We are very pleased to have individuals with such high level of expertise join our Board of Directors,” said Booth Kalmbach, Entigral’s President and CEO.  “Each of these individuals has extensive experience in our industry and our markets.  They will give us valuable advice on growth and customer opportunities and I look forward to working with each of them as we continue to build a world-class company focused on solving the asset management and tracking problems that are material to our customers.”

Allen Bennett, Entigral’s Chairman and Founder, said, “With our recent round of financing, adding these outside board members was a logical step to give us the advice and counsel to assist us in our growth.  Their contacts and relationships will be invaluable.”

New board member, Mr. Miller, said “I am looking forward to joining the Entigral Board and working closely with the company.  Entigral has an exciting and industry leading solution for asset tracking using RFID technology in manufacturing and industrial environments.  Because their solutions deliver bottom line results and productivity, their customer base is growing and they are getting a lot of national exposure and interest from leading companies.”

For more information about Entigral Systems and its solutions, please visit www.entigral.com.

IoT in MANUFACTURING 2020
THE NUMBERS

How many connected things will be deployed in the factories of tomorrow, how will they be connected, and what functions will they perform? 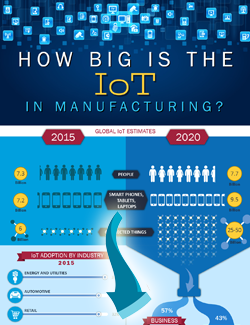